BOSTON, June 25, 2019 - Catastrophe risk modeling firm AIR Worldwide (AIR) today announced that it has released an expanded inland flood model for Central Europe to include the country of Poland in its model domain. AIR also announced that it has updated the storm surge component of its coastal flood model for Great Britain, which is now incorporated into the AIR Extratropical Cyclone Model for Europe. AIR Worldwide is a Verisk (Nasdaq:VRSK) business.

"The AIR Inland Flood Model for Central Europe is a fully stochastic, event-based flood model designed to support both individual risk selection and portfolio risk management," said Cagdas Kafali, senior vice president of research, AIR Worldwide. "It covers the effects of precipitation-induced flooding to insurable properties for both on- and off-floodplain locations. The model captures many of the complexities inherent in the flood-generation process, such as the space-time patterns of rainfall input; the effects of a highly variable climate, topography, soil type, and other local factors that determine the amount of rainfall drained to the rivers; and the effects of snowmelt and man-made flood defenses on the flood risk. It also accounts for policy conditions with each of the modeled countries."

AIR also announced a major update to the storm surge component of the AIR Coastal Flood Model for Great Britain, including new storm surge events for the stochastic catalog and an expanded model domain that includes all coastal areas of England and Wales. Additionally, the storm surge peril update incorporates detailed coastal sea defenses, such as levees and sea walls and their probability of failure, and updated damage functions. The updated coastal flood model for Great Britain will now be incorporated into the AIR Extratropical Cyclone Model for Europe to provide a more comprehensive and consistent view of the overall risk. Including storm surge in the United Kingdom as a new sub-peril in the AIR Extratropical Cyclone Model for Europe enables the model to realistically account for the link between intense storm systems and the associated coastal surge effects they generate.

Kafali concluded, "The updated extratropical cyclone model explicitly captures damage and loss associated with winds from large-scale windstorms in 22 European countries. With approximately 10 to 15 percent of coastline less than 5 meters above sea level, the UK is one of the countries in Europe most vulnerable to coastal flooding. The new surge sub-peril can capture the effects of storm surge flooding on insured properties on the coasts of England and Wales and help address the wide spectrum of storm surge risk management needs of all stakeholders throughout the insurance and reinsurance industries, while accounting for the insurance policy conditions specific to the modeled regions of Great Britain."

The AIR Inland Flood Model for Central Europe and the AIR Extratropical Cyclone Model for Europe are currently available in the Touchstone®, Touchstone Re(TM), and CATRADER® catastrophe risk management systems. 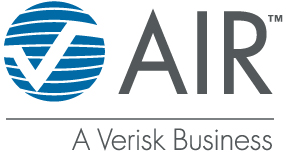