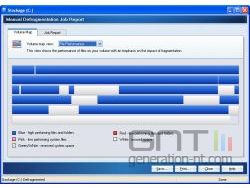 As you create more and more partitions, you actually create slower volumes - this is because each partition is created on more inner cylinders. Since your OS is on the outer tracks and physically preventing the files on your other volumes from occupying these tracks - your other files will at best only achieve around 95% of optimal performance.
One of the items we recommend if you are using UltimateDefrag is to not partition and keep all your files on one volume. Let UltimateDefrag get all of the extraneous files out of the way and put the important files on the outer tracks - this way all commonly used files perform at their optimum.

If you are using Diskeeper with I-FAAST I would also advise the same i.e. maintain just one partition since I-FAAST places the important "often used" files to the outer tracks also.

What UltimateDefrag does (and Diskeeper's I-FAAST) effectively achieves is the same effect as not having those "unused" files on the drive. They are still on the drive but on the slower inner tracks and out of the way and not competing for the outer band where fastest transfer performance is realized.

We basically apply the Pareto Principle in that 80% of the time you only use 20% of your files. The other 80% of the files compete with "high performance" area for fast access space on your drive and also reduce seek confinement and compaction. The less tracks your hard drive heads traverse to access data the shorter the seek times - vastly shorter. Putting all of the unused or rarely used files out of the way to the inner tracks now gives your most often used files better seek confinement and compaction.

[...] One thing we do however is to place directories right next to the MFT. This does result in significantly improved perfromance since there are a lot of MFT/Directory transactions that occur when accessing a file. MFT next to the Directories makes these transactions, and ultimately file access, fast.