The new mixed reality game is available for free today and delivers the most immersiveAngry Birds experience yet with precision controls and incredible spatial gameplay STOCKHOLM, Sweden, and ESPOO, Finland - Oct. 9, 2018 - Angry Birds fans can now ... 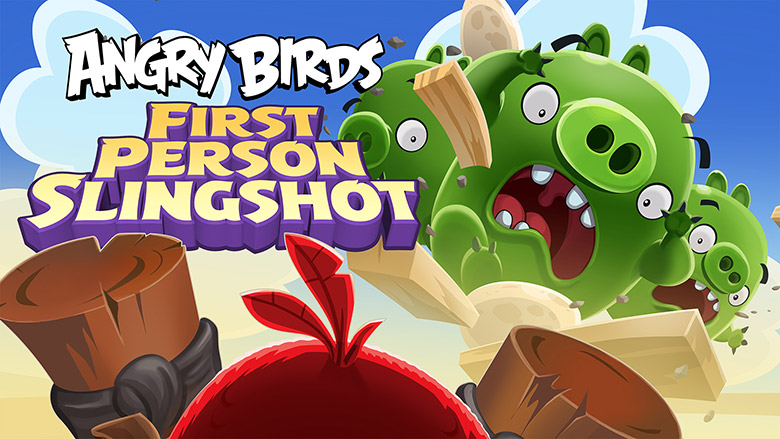 Angry Birds FPS is the first gaming experience developed entirely by an independent developer for Magic Leap's spatial computing platform. A first-person slingshot lets players see incredibly realistic animated characters and objects overlaid onto their actual environment, bringing Angry Birds to life like never before - right in users' homes. Magic Leap One Creator Edition is a lightweight, wearable computer that enriches your experience in the real world with digital content. A trailer of the game is available here.

Kati Levoranta, CEO at Rovio Entertainment, commented, "It's great to offer Angry Birds fans a completely new and unforeseen way to play the beloved Angry Birds. Resolution Games has done an excellent job at developing the Angry Birds to Magic Leap One. We're always looking for opportunities to expand to new technologies and platforms, and Angry Birds FPS is an exciting step forward into the future of gaming."

For the very first time, Angry Birds fans can explore and navigate their environments to select which object to hit and angle their shot precisely for maximum impact. Players can then assess the damage by simply walking up to and around the structure. As players take aim, either directly or by bouncing off actual objects in the room, they can try to inflict maximum damage to the Green Pigs with the least hits or from farthest away to earn more points and stars in each level.

"Rovio has established an incredibly successful and beloved entertainment franchise with Angry Birds. By taking Angry Birds to Magic Leap's spatial computing platform, we're giving fans one of the most engaging, interactive and immersive experiences possible," said Tommy Palm, CEO of Resolution Games. "It really is quite remarkable that in 2018 we're able to use full spatial gameplay and light field technology to enjoy these classic game mechanics and characters in our own environments. Angry Birds FPS: First Person Slingshot demonstrates the true impact mixed reality technologies can have on the games industry."

"We are thrilled to bring the iconic Angry Birds franchise to Magic Leap's spatial computing platform," said Rio Caraeff, Chief Content Officer at Magic Leap. "Having recently launched Magic Leap One Creator Edition, we're at an exciting moment in time when we get to see and experience what developers create for the platform. Working with Resolution Games, Rovio Entertainment has made a version of their iconic classic for Magic Leap One that showcases the potential of immersive, content-driven experiences and is also loads of fun."

Resolution Games is a games studio focused on visual computing. In their first three years, they have produced one of the most popular virtual reality (VR) titles of all time (Bait!), and their games are among the highest-rated on their respective platforms.

Rovio Entertainment is best known for its global Angry Birds brand, born from the world-famous Angry Birds Classic game. Today, Rovio has a wide portfolio of Angry Birds games which, although primarily designed and marketed for adult players, are always appropriate for all audiences. Collectively to date, Rovio's Angry Birds games have garnered a staggering four billion game downloads since 2009 alongside one of the strongest mobile game brand licensing programs in the world, making Angry Birds one of the most successful mobile gaming IPs in history.

About Rovio Entertainment:
Rovio Entertainment Corporation is a global entertainment company that creates, develops and publishes mobile games which have been downloaded over 4 billion times. The Company is best known for the global Angry Birds brand, which started as a popular mobile game in 2009, and has since evolved from games to various entertainment and consumer products in brand licensing. Today, the Company offers multiple mobile games, animations and has produced The Angry Birds Movie, which opened number one in theatres in 50 countries, the sequel of which is in production. Rovio is headquartered in Finland, and the Company's shares are listed on the main list of the NASDAQ Helsinki stock exchange with the trading code ROVIO. (www.rovio.com)

About Resolution Games:
Resolution Games is a VR and AR games studio and publisher aimed at creating immersive experiences for all - from gamers to non-gamers alike. The studio continues to push the limits of the emerging visual computing space with titles ranking among the highest rated and most downloaded across every major VR and AR platform. Their games include Angry Birds FPS: First Person Slingshot, Bait!, Bait! Arctic Open, Wonderglade, Narrows and Solitaire Jester, with several more on the horizon. The studio is composed of game industry veterans, serial entrepreneurs and thought leaders with a proven track record of widely acclaimed success spanning across mass market and AAA games, free-to-play games, hardware and more. Resolution Games is privately held and based in Stockholm, Sweden.