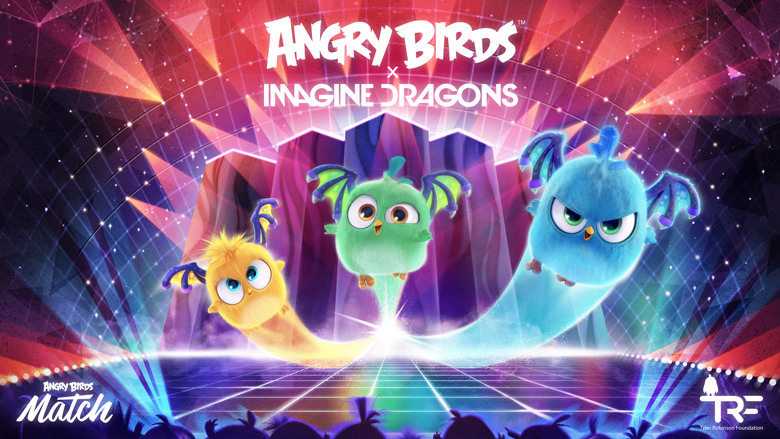 
Imagine Dragons commented:
"The Tyler Robinson Foundation is a cause very close to our hearts. These kids and their families should never have to suffer financial despair when they're already battling cancer together, and it's an honor to help them out any way we can. We jumped at the chance to join with Angry Birds to bring more awareness and support to TRF and these kids."


In "Angry Birds x Imagine Dragons," adorable baby Angry Birds, a.k.a. the Hatchlings, need a hand as they get ready to rock out in support of TRF. Take part in special challenges, collect VIP passes, and help the Hatchlings set the stage for the biggest concert ever. The in-game event features an exciting new location, the Las Vegas Concert Arena, and three new characters with nine exclusive outfits, including rockstar gear and dragon wings. Additionally, Imagine Dragons' track "Natural" will be showcased in-game.


Kim Gradisher, Tyler Robinson Foundation Executive Director, said:
"We are incredibly grateful to Imagine Dragons and Rovio Entertainment for using this compelling brand pairing to support TRF and the many families battling pediatric cancer. By using their considerable public platform and reach to draw awareness and encourage giving, Imagine Dragons and the creators of Angry Birds have helped to make a deep impact in the lives of TRF families. Every day, but particularly in September during childhood cancer awareness month, it's so important to let these families know they do not face their battle alone."


"Angry Birds x Imagine Dragons" coincides with childhood cancer awareness month and is one of many initiatives TRF supports during September to expand its mission. The Angry Birds Match game will also be featured during the Foundation's annual "Rise Up" charity gala held on Friday, Sept. 14, in Las Vegas. Integrated placements in the game will link to the campaign's landing page at trf.org/angrybirds, where players can read more about the cause and take action by donating.


Ville Heijari, CMO, Rovio Entertainment, commented:
"It's an honor to team up with Imagine Dragons to support all the good the Tyler Robinson Foundation does for children and families battling this life-threatening disease. It's our hope Angry Birds Match will help raise awareness around the world about this very important mission and inspire fans everywhere to join the cause."


Imagine Dragons fans can give back to TRF and catch the band perform an exclusive acoustic set during the "Rise Up" gala by visiting Facebook.com/ImagineDragons on Friday, Sept. 14, at 9 p.m. PT. For more information on TRF and "Rise Up'' gala visit //www.trf.org/.


Angry Birds and all related properties, titles, logos and characters are trademarks of Rovio Entertainment Corporation and are used with permission. All Rights Reserved.


About Rovio Entertainment
Rovio Entertainment Corporation is a global entertainment company that creates, develops and publishes mobile games, which have been downloaded over 4 billion times. The Company is best known for the global Angry Birds brand, which started as a popular mobile game in 2009, and has since evolved from games to various entertainment and consumer products in brand licensing. Today, the Company offers multiple mobile games, animations and has produced The Angry Birds Movie, which opened number one in theatres in 50 countries and the sequel which is in production. Rovio is headquartered in Finland and the company's shares are listed on the main list of NASDAQ Helsinki stock exchange with the trading code ROVIO. (www.rovio.com)


About Imagine Dragons
Formed in 2009 and featuring lead vocalist Dan Reynolds, guitarist Wayne Sermon, bassist Ben McKee, and drummer Daniel Platzman, Imagine Dragons earned a grassroots following by independently releasing a series of EPs. After Alex Da Kid signed them to his KIDinaKORNER/Interscope label, the band made its major-label debut with the release of Continued Silence, a 2012 EP featuring the 2x platinum breakthrough single "It's Time." Night Visions arrived later that year and Imagine Dragons found themselves on a skyward trajectory that saw the album debut at No. 2 on the Billboard Top 200 Albums chart and became the No. 1 album on Spotify Worldwide for 2013. Night Visions has sold more than 5 million copies worldwide. The album's second single, the 9x-platinum "Radioactive," hit No. 1 on the Billboard Rock chart and earned the band a 2014 Grammy for "Best Rock Performance." The third single, "Demons," hit No. 1 on Alternative and Top 40 radio, and has sold 3.9 million copies in the U.S. Imagine Dragons' platinum-selling second album, Smoke + Mirrors, debuted at #1 on the Billboard Top 200 album chart and has sold 1.1 million copies worldwide. Imagine Dragons' third studio album, Evolve, has been certified double-platinum within a year of its June 2017 release. Evolve has spent 60 weeks on Billboard's Top 200 Albums chart. The album is 10th in the world on Spotify with over 38 million monthly listeners.


About The Tyler Robinson Foundation
The Tyler Robinson Foundation (TRF) helps strengthen families financially and emotionally as they cope with the tragedy of a pediatric cancer diagnosis by providing grants specifically to offset out-of-pocket life expenses. TRF is the nonprofit organization of the Grammy Award-winning band Imagine Dragons. TRF meets a critical need in communities across the U.S., Canada and Mexico. Each year, one in 285 children are diagnosed with cancer. While many pediatric cancer organizations focus on growing awareness and support for families with the physical and emotional toll of a diagnosis, the huge financial hardship cancer treatment places on families is rarely discussed. More than 85-percent of every dollar TRF raises goes right to families in need. For more information visit TRF.org.