WISeKey International Holding SA / WISeKey opens its Geneva Blockchain Center of Excellence Headquartered at the World Trade Center II Geneva . Processed and transmitted by West Corporation. The issuer is solely responsible for the content of this ...

WISeKey International Holding SA / WISeKey opens its Geneva Blockchain Center of Excellence Headquartered at the World Trade Center II Geneva . Processed and transmitted by West Corporation. The issuer is solely responsible for the content of this announcement. 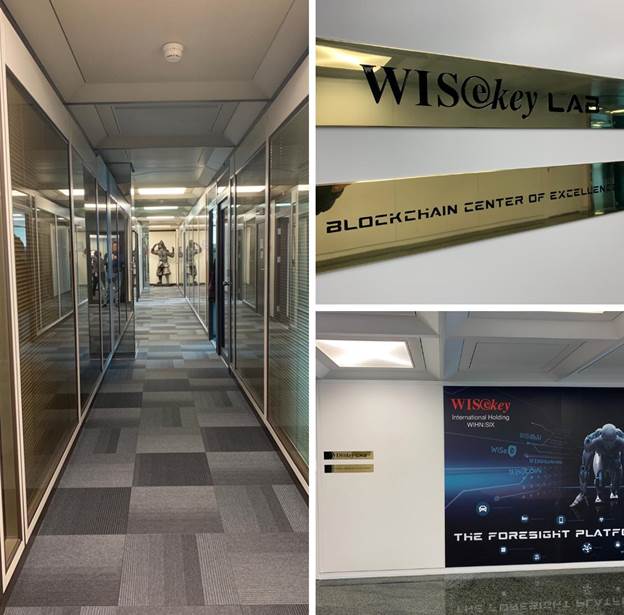 The Geneva Blockchain Center of Excellence will be officially inaugurated in April 2019, marking the celebration of WISeKey's 20th Anniversary.

In addition to the Blockchain Centers of Excellence already being established by WISeKey in India, Mauritius and Rwanda, the agreement foresees the creation of additional centers, including Buenos Aires, Argentina. All of these centers will be interconnected via 3 Hubs: Geneva, Toronto and Beijing, a Trust Triangle operating under a Common Trust Protocol, using WISeKey's PKI hardened Blockchain technology, bringing trust and security, while maintaining the core Blockchain values of transparency, auditability, and traceability.  WISeKey's implemented and integrated PKI solution is complementary to any Blockchain platform, where it can assist with developing a better trust model for use within a distributed system and create a universal Trust Protocol for the Internet 2.

The business model of the Geneva Blockchain Center of Excellence is to assist Blockchain startups and research to promote their technologies internationally, facilitate the rapid adaptation and on-boarding of Blockchain-based solutions, foster stronger collaboration between the public, private and academic sectors and cooperate to ensure that the latest technological standards are made available in a safe and trusted manner.

One of the ongoing projects of the Geneva Blockchain Center of Excellence is the Security Token Offering (STO) of WISeCoin AG, a Special Purpose Vehicle created by WISeKey to build the infrastructure for secure intra-object interactions for which WISeKey received a "non-Action Letter" from The Swiss Financial Market Supervisory Authority (FINMA). WISeCoin will pursue the (STO) in Q2 2019. WISeCoin AG was formally established in August 2018 to secure the Blockchain and Internet of Things (IoT) world, which due to its continuously increasing size and complexity, is constantly vulnerable to cyber threats. WISeCoin AG benefits from the WISeKey architecture as the first and only vertically integrated platform combining proprietary cybersecurity software and secure microcontrollers designed to protect connected devices against evolving cyber threats.

One of WISeCoin's key milestones will be the establishment of a Blockchain of Identity which will offer connected objects the ability to identify, authenticate and verify each other with a digital certificate. For each transaction, a service fee will be charged to users of the platform, through a utility token, called the WISeCoin token. To participate in this platform, each connected object must be equipped with WISeKey's Secure Element consisting of a tamper resistant silicon chip, called VaultIC184.

WISeKey (SIX Swiss Exchange: WIHN) is a leading global cybersecurity company currently deploying large scale digital identity ecosystems for people and objects using Blockchain, AI and IoT respecting the Human as the Fulcrum of the Internet. WISeKey Microprocessors Secures the pervasive computing shaping today's Internet of Everything. WISeKey IoT has an install base of over 1.5 billion microchips in virtually all IoT sectors (connected cars, smart cities, drones, agricultural sensors, anti-counterfeiting, smart lighting, servers, computers, mobile phones, crypto tokens etc.).  WISeKey is uniquely positioned to be at the edge of IoT as our semiconductors produce a huge amount of Big Data that, when analyzed with Artificial Intelligence (AI), can help industrial applications to predict the failure of their equipment before it happens.

Our technology is Trusted by the OISTE/WISeKey's Swiss based cryptographic Root of Trust ("RoT") provides secure authentication and identification, in both physical and virtual environments, for the Internet of Things, Blockchain and Artificial Intelligence. The WISeKey RoT serves as a common trust anchor to ensure the integrity of online transactions among objects and between objects and people. For more information, visit www.wisekey.com.

This press release does not constitute an offer to sell, or a solicitation of an offer to buy, any securities, and it does not constitute an offering prospectus within the meaning of article 652a or article 1156 of the Swiss Code of Obligations or a listing prospectus within the meaning of the listing rules of the SIX Swiss Exchange. Investors must rely on their own evaluation of WISeKey and its securities, including the merits and risks involved. Nothing contained herein is or shall be relied on as, a promise or representation as to the future performance of WISeKey.